I read, awhile back, that today is the tenth anniversary of the death of Elliott Smith. I’ve written (many times) before about how much I love Smith’s music; I found it around the time that XO was released, at which point his combination of melancholy, melody and devotion to both the Beatles and Big Star seemed tailor made for me. I saw him live once, during his tour promoting Figure 8, and he was everything I wanted him to be — passionate, loud and funny, and with a band that could convincingly bring his music to life in a way that translated the things I adored so much in the recordings.

Up through his death, he was a figure that was amazingly important to me — my go-to answer if someone had asked me who my favorite musician was, and someone that I listened to constantly, much to the complaints of Kate, who didn’t like the sound of his voice. These days, I listen far less often; there was a point the other week when “Kings Crossing” from From A Basement On The Hill came on the shuffle of my iPhone, and I realized that it’d been months since I’d last listened to him. I’m not sure if it’s that I’m no longer in the kind of emotional place that he resonates so deeply, that I’ve simply moved on for other reasons, or something else, but I felt guilty when I realized how long it had been.

Nonetheless, Elliott Smith remains someone whose work is endlessly essential to me on some core level. His way around melody, harmony and lyrical ambiguity is something I treasure still, and wish that others would be able to play with as effortlessly as he made it look. If only he’d had a happier life, and was still around.

This song has been in my head ever since I saw Mirah perform it with the Portland Symphony this past weekend, for two reasons in particular. Firstly, the bridge(?) melody that starts at 0:58 and the way it acts as counter to everything around it but also manages to amp up the expectation and tension before the strings crash back in, and secondly, the lyrics “And I’m so number one that it’s a shame, a shame/That you let other numbers in the game.” I have no idea why, but those lyrics seem so perfect to me.

I don’t pay enough attention to Mirah’s lyrics, which is a shame; I’m too often smitten by her melodies and her arrangements (“The Dogs of B.A.”! “Country of the Future”! Both have such wonderfully overwhelming arrangements, can you blame me? This one, too — that bass line at 3:38 that acts like a tuba), but she has a wonderful way with words that I need to recognize, too.

In a moment that’s oddly fitting — or, at least one that’s demonstrative of my weeks these days — I ended up being too busy to remember that this past Wednesday was the 10th anniversary of the start of Fanboy Rampage!!!, the blog that started me down the road to my current career. I’d meant to do something to mark the anniversary, but could never quite work out what that something would be, which says something about the weird way with which I regard the blog now.

My feelings towards it are complicated but mostly affectionate, if only because it’s FBR that directly led to Newsarama and to io9, from which everything else followed. Without that blog, without that shamelessness and self-righteousness and everything that came from it, I wouldn’t be where I am today, etc. But, man. That that was 10 years ago makes me feel weird, both in the sense of “I’m so old now,” and also “I was as old as 29 when I started it?”

Happy Belated Birthday Rampage!!! You know I love you really.

I’ve been on a “Paul McCartney’s solo career immediately after the Beatles” kick lately, after realizing just how much I’d underrated his work on those last couple of Beatles albums. There’s a lot happening in McCartney in particular that feels just weirdly important to the music that I’d grow up loving, if that makes sense — it’s both throwaway (The number of instrumentals! “Junk” appearing twice!), yet some of the arrangements (especially “Maybe I’m Amazed” and “Singalong Junk”) are just perfect. It’s so much more influential than I’d realized, I think.

(It’s also one of those albums that makes me wish I had any musical talent; I wish I could something like this album, in so many ways.)

The first draft for a thing for Time that ended up being rewritten from scratch and, bizarrely, about an entirely different television show altogether (although, if/when it goes live, you will see mention of Columbo in there).

Somehow, more than four decades after the fact, I have become entirely addicted to Columbo.

It’s tempting to point to Netflix as being at least one of the causes for my current quasi-need to watch old, more-than-a-little hokey television crime shows made even before I was born. After all, if it wasn’t for their ease of availability — The first seven seasons of the show are right there for the streaming right now, each episode featuring at least one familiar face wildly protesting their innocence despite their being the guilty party — I doubt that I’d currently be in the predicament I’m in, spending at least a couple of evenings a week watching Peter Falk bumble his way through investigations.

Of course, Netflix has all manner of material on offer that I’ve yet to end up hopelessly hooked on, so I can’t throw all of the blame in that direction. I should also blame the Nerdist Writers Panel and whichever guest talked about the series in hushed, reverential tones (I’ve long forgotten, sadly). It was, she said, a great example of American Class War fiction, with the working man constantly unraveling schemes of those who consider themselves above not only the laws of the land, but morality itself. Hearing that description, how could I do anything but watch the pilot episode?

What I found when doing so was something that seemed so unusual and curious that I went into the second episode almost immediately after, thinking Well, they can’t keep this up all the time, only to find out that, not only can they, they do. The more episodes I watch — I’m midway through the third season already, appallingly — the more I marvel at the way in which Columbo is, in many ways, the murder mystery show that can’t quite help but contradict the genre over and over again.

Let’s start with the most obvious break from the norm: There is no mystery in this murder mystery, with each episode showing the murder in its opening act. That changes the shape of everything that follows in ways that aren’t even immediately apparent; not only is there no need for the viewer to try and guess the murderer’s identity, but showing the murderer and murderee interact straight away removes any need to waste any more time later on with exposition regarding motive. Furthermore, Columbo also does away with the traditional red herrings as the cops track down dead lead after dead lead, because again: We already know who did it, so why bother?

It’s also a show that happily ditches another important detective story tradition, by removing the cult of personality surrounding the detective. As viewers, we have no idea who Columbo is, any more than the murderers do. Sure, he talks about his home life a lot, but the one thing that the show makes clear over and over again is that Columbo will do or say anything to get people to lower their guard. For all we know, his wife is as fictitious as his bumbling persona and scatterbrained forgetfulness. We never go home with him after the case is over, so we have no proof about anything that he’s saying.

But how could we follow him home after the case is over when every episode ends with the arrest of the murderer? It’s a weird storytelling choice, and one that I keep coming back to again and again. On the one hand, it makes a lot of sense — Each episode opens with the murder and closes with the murderer being discovered; there’s some sense of symmetry there– but, at the same time, the viewer is robbed a particular sense of closure as a result. No scenes of everyone else laughing and reassuring us that they’re going to be okay in this show; the bad guy gets caught, but everything else is left unknown and up to the viewers’ imaginations.

It all adds up to a show that should be cold and far less likable than it actually is. I find myself wondering, with increasing frequency, what Columbo would be like without Peter Falk in the title role, and suspect that the answer is “a show that would’ve been cancelled in its first season.” There’s so much about Columbo that pushes against everything that has been proven, over and over, to “work,” and yet it works nonetheless. There’s a lesson here that should be remembered by everyone in television: When you have someone so charismatic at the center of your work to win the audience over so effortlessly, it’s a license to play with everything else without anyone even noticing.

I feel like my subconscious is making some kind of religious suggestion with the pattern of these files on my desktop. 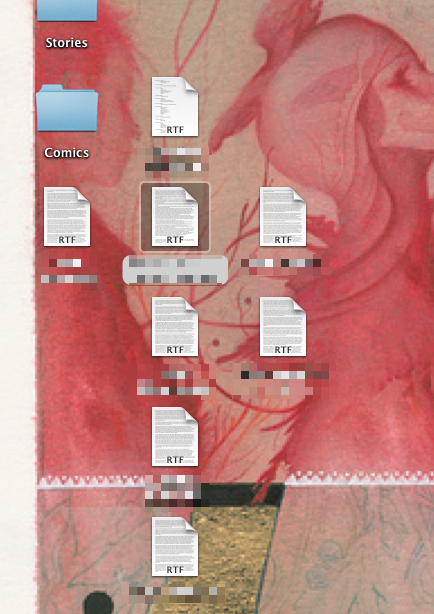 (All of these are stories that are finished and submitted to various places — I keep them around in case I need to go back and check something before they go live. Normally, they go inside the “Stories” folder you can see on the top left, but I hadn’t gotten around to that yet.) 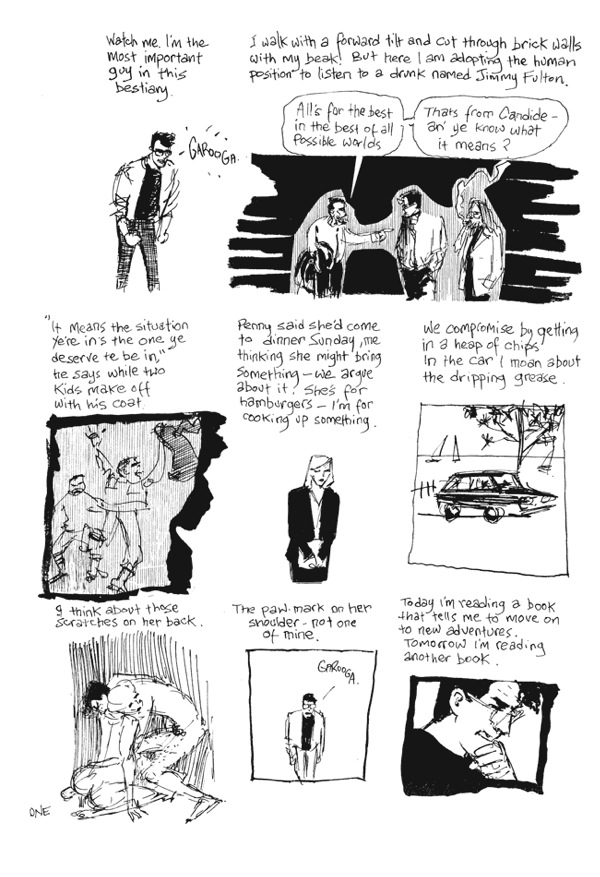 Got myself a copy of Alec: The Years Have Pants from the recent online sale from Top Shelf Comix, and read through it last night — it reminded me how weirdly important Eddie Campbell was to my development both as an artist back when I was in art school, and as a writer. There’s something remarkably amiable and offhand about his work, as if he’s effortlessly just sharing something with you, that I strive for even now with non-work writing (and, usually, fail). Thinking about my shortlived late ’90s diary comics — honestly, created as somewhere between decompressor and way to have another sketchbook full of something for my final year of the BA (Hons) program I was in — I can see Eddie Campbell’s fingerprints all over them, alongside (slightly less obviously) those of Kyle Baker, Evan Dorkin and Nick Abadzis.

I don’t have those comics now, for the most part — I got rid of almost all of my student work when I moved to the U.S., because it meant less to move and I was trying to travel light to save money  — but I think about them sometimes. For some reason (Perhaps a Facebook posting that reminded me that it was 20 years since I matriculated for art school, holy crap), I’ve been thinking about that whole era of cartooning and writing and everything recently. Somewhere out there, there’s a me who kept doing all of that stuff. I wonder what happened to him?

(Image above from Graffiti Kitchen, one of the stories in the Alec book; probably my favorite, and possibly my favorite comic of all time.)