More seriously, it depends what you’re looking for? That’s so broad, I have no idea how to answer it in a way that’s useful for you. Sorry…?

It took me awhile to realize this is probably in response to the Andrew Wheeler quote about Marvel Studios’ lack of diversity that I tumbl’d ages ago. While I’m fine acknowledging what’s already been done and who’s responsible for it, I’m not sure why that means that Marvel Studios should be let off the hook for having an absolutely appalling record of diversity in their movies. Is the logic meant to be “Well done, the Black Panther means you get a pass for awhile?” That was done almost 50 years ago by a company that, to all intents and purposes, is entirely separate from Marvel Studios.

(Also, for what it’s worth, while I’ll give Marvel credit for having the first mainstream black superhero with the Black Panther, it was neither the first to have black superheroes — that’d be All Negro Comics’ Lion-Man, back in 1947 — nor “black people in their comics,” which is just crazily off-base. Hell, a year before Kirby and Lee created T’Challa, Dell had Lobo, the first U.S. comic with a black male solo lead.)

Let’s walk through the scenario – A large comic publisher seems to have an opportunity or desire to expand their readership to include more women and thus increase revenue. They issue a cover that shows one of their female characters in a highly sexual pose with a distorted ass.

You may think I am discussing this week’s web explosion over Milo Manara’s variant of the first issue of Spider-Woman. But I could just as well be discussing the 0 issue of Catwoman from two years ago. 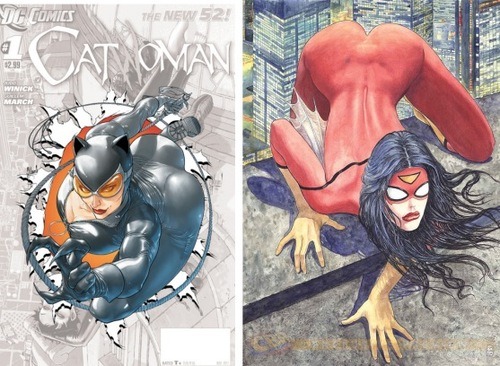 The Gentry is representative of the worst of the comics industry. Lord Broken, a demonic house loaded with eyes and composed of haphazardly stacked stories, can clearly stand for a distorted Marvel, “the House of Ideas.” Note that artist Ivan Reis has chosen for each story to be thinner and less stable than the last, perhaps a nod to Marvel’s continued mining and refining of the work of Stan and Jack, producing weaker results with each incarnation—broken visions. Intellectron, a bat-like figure with one eye, is clearly the worst of DC—a single vision dependent on references to Batman—dark and myopic.

Cheryl Lynn just destroys with this quick piece about The Multiversity #1.

It strikes me as unlikely and wonderful that in a period where my belief in humanity is particularly low thanks to what’s happening elsewhere in the world, a new Grant Morrison comic and a new season of Doctor Who – two things that offer a particularly optimistic brand of escapism – should be released.

Police in Ferguson, Mo., on Monday began telling protesters – who have been gathered for days demanding justice for the death of an unarmed teenager at the hands of police – that they were no longer allowed to stand in place for more than five seconds, but had to keep moving. When inquiries were made to law enforcement officers regarding which law prohibits gathering or standing for more than five seconds on public sidewalks,” the ACLU of Missouri wrote in its emergency federal court filing to block the apparent policy, “the officers indicated that they did not know and that it did not matter. The officers further indicated that they were following the orders of their supervisors, whom they refused to name.” The ACLU argued the policy was a prior restraint on speech and asked for a temporary restraining order.

“The attorney general came to court via phone and announced that there was an alternative speech zone that was being set up,” Tony Rothert, the legal director of the ACLU of Missouri, told msnbc. That satisfied the judge, who agreed it was a close call but denied the ACLU’s request to block the policy.

So where and what was that free speech zone? “It’s supposed to be at the intersection of Ferguson and Florissant,” Rothert said. “There is a field there, but it is padlocked and no one can get in.

America 2014: “Free Speech Zone padlocked and no one can get in.“  Yeah, that about sums it up. (via twiststreet)

Jess was on her way to college with an athletic scholarship—until her first sexual experience enabled her to see inter-dimensional monsters who live secretly among us and feed on SINERGY (energies emitted by sin)!

From the new Image solicits, a book called Sinergy. Weren’t we just talking about books that would try and take Sex Criminals as their starting point on the last episode…?

(Also, “emitted by sin” sounds worryingly puritanical to me. Does this mean the book is assuming that sex out of wedlock is a sin? Because, holy shit if so.)