I’m going to repeat a bunch of stuff I said on Twitter last night. 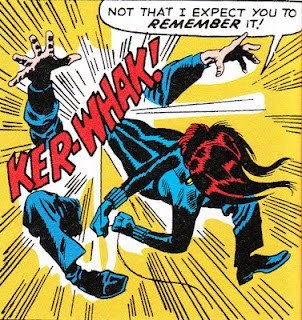 I think that, as my views become more radicalized, I also become more apathetic. I think I have to, to be able to live in the world. That obviously applies to much more than superhero movies, but I think it’s absolutely…

How Gamora, Black Widow and other Marvel women handle sexism

Turning sexism back on the people who try to use it against women feels a little bit like a superpower.

I haven’t seen Guardians yet–I know, I know, I’m a bad fan–but I was interested to read this, especially after reading this. I’m not in agreement with Alyssa on this one, in terms of the larger Marvel attitude towards sexism, in large part because I think all of the female characters in these franchises with one exception* are largely, if not entirely, defined by their relationships to men, and are in every case placed in submissive positions to men**.

I read something last week where someone wrote something along the lines of “Joss Whedon gets strong female characters mixed up with women he’d like to sleep with”; it’s a cheap line, but not one that’s completely off-base. Certainly, when I see discussions about “strong women” in Marvel movies, it often feels to me that “Women who punch things and quip at bad guys” is mixed up with independence, agency or anything approaching equality.

Nonetheless: Alyssa raises things to think about, and makes me want to see the scene in question–and Guardians in general–more than I already do.

(* That one being Jane Foster from the Thor movies. Arguably, it’s two, because there’s Darcy in those movies, as well.)

(** Part of this, of course, comes from the fact that–Avengers and Guardians aside–the movies are “about” the male lead, and so every other character is in some way defined in relationship to them. And yet… and yet…)