So, we didn’t get nominated for the Eisners this year, and I’ve surprised myself by being quite as upset as I’ve been. When I first saw the nominations, I immediately scrolled to the Periodicals/Journalism section in excitement, then — upon not seeing THR — told myself that it was a bummer, but understandable considering the weird process of the Eisners judging system and, really, no big deal. And then I realized more and more that it was a bigger deal than I thought.

There’s some level of rejection anxiety in here, of course, and no small level of frustration that one of the two things I did this year motivated by a sense of, You know what, I am good at what I do was so definitively stymied. (Actually, it was both, in the end; I got turned down for the raise I mentioned awhile back, too.) What the rest of the ingredients were for my mood on Friday, though, I can’t fully explain. Tiredness? The karmic downside for having enjoyed Avengers: Endgame the night before…?

Whatever the reason, I spent Friday increasingly glum and, more annoyingly, increasingly distracted and unable to work as quickly as I needed, leading to me carrying work through to the weekend in order to hit deadlines. It wasn’t the best way to deal with a creeping suspicion that maybe my work is unappreciated and I’m working too much for too little reason, but the fates have a cruel sense of humor that way, I guess. I’m not sure if I didn’t hit my deadlines because I was distraught that no-one appreciates me is in any way a good excuse that works, but let’s not try to find out anytime soon.

For anyone wondering what my Thursday afternoons have looked like recently, these graphics for the THR Heat Vision newsletter offer some clue, I guess…?

I have found myself thinking, more than once lately, about the fact that I wish I could give more money to more Patreon campaigns. I already contribute to a bunch via the shared Patreon for the Wait, What? podcast — Jeff and I agreed when we launched that, that a percentage of what we made would be passed on to other campaigns — but there are more people I find myself wanting to support. The problem is, affording that.

In the wee small hours of the morning recently, I found myself imagining setting up another Patreon, just for me, not the podcast. It would be something where I could support personal writing and have more time and space to write the World That’s Coming, I told myself in a sleepy haze, but I was actually imagining a system with which to raise funds that I could then turn around and give to others.

Maybe I should simply set up a crowdfunding campaign explicitly targeted at funding other Patreons. Call it the Help Me To Help Others campaign. Just be blunt about it.

At some point, I stopped discovering new music.

Once upon a time, doing that was easy. I was young and in the UK in the 1990s; I just listened to Radio 1 all day, through the Britpop daytime and into the evening Evening Sessions, Mark And Lard, John Peel, whatever. New music came to me that way, or during the weekly weekend trips to record stores where I’d buy singles based on their cover artwork or how strange a band’s name seemed.

A decade later, and it was the era of the mp3 blog, an online network of friends I’d never met sharing the sounds they’d discovered for themselves and gotten excited about. It wasn’t the same as before; it was slower and less passive, but I discovered a number of favorite acts that way. (Curiously, most of them being solo female performers; I don’t know whether that was a bias on my part, or the bloggers.)

Now, I rarely find new things. Perhaps it’s my age, or that delivery systems have changed again. (I’m on Spotify, I promise; I just rarely use their Daily Mixes or whatever.) I find myself reading reviews of things and then searching them out, instead of things finding me with the lucky happenstance of before. Occasionally, it still happens — I’ll hear something by chance and have that What was that, I have to hear more response — and it’s especially thriling when it does, now. But for the most part, I’ve stopped discovering new music.

It’s something I miss, dearly.

I can remember with surprising clarity the circumstances in which this photo was taken; I was walking around San Francisco in the evening, having just taken a meeting about my immigration status at the time. (I wasn’t a full citizen yet, but that was about to happen; that’s what the meeting was about.) I’d become obsessed with signage in the city, as well as images of decayed materials, so of course this called out to me. I didn’t realize at the time that I was going to leave the city for Portland within the year, but on some level, I must have known — before I left Aberdeen for the final time, I became equally obsessed with the signage in that city, too.

In contrast, I went through a Portland signage obsession maybe a year or so into arriving, and I’m still here, a decade later. Perhaps it’s a sign that I’m going to stick around.

I’m writing this on the plane back from Chicago at the end of Star Wars Celebration — a five day trip (and four day convention experience) that pretty much took over more than a week of my life considering the prep required to be able to leave in the first place. To give a brief idea of what it was like — and, more honestly, to keep track of things for myself — here are photos I posted to Twitter from the show, most of which from the first afternoon when everything was new and exciting and not oh my God is there actually life outside this massive convention center which is somehow also two hotels how does that even work.

(No, really, how does that work? It was a really strange thing.) 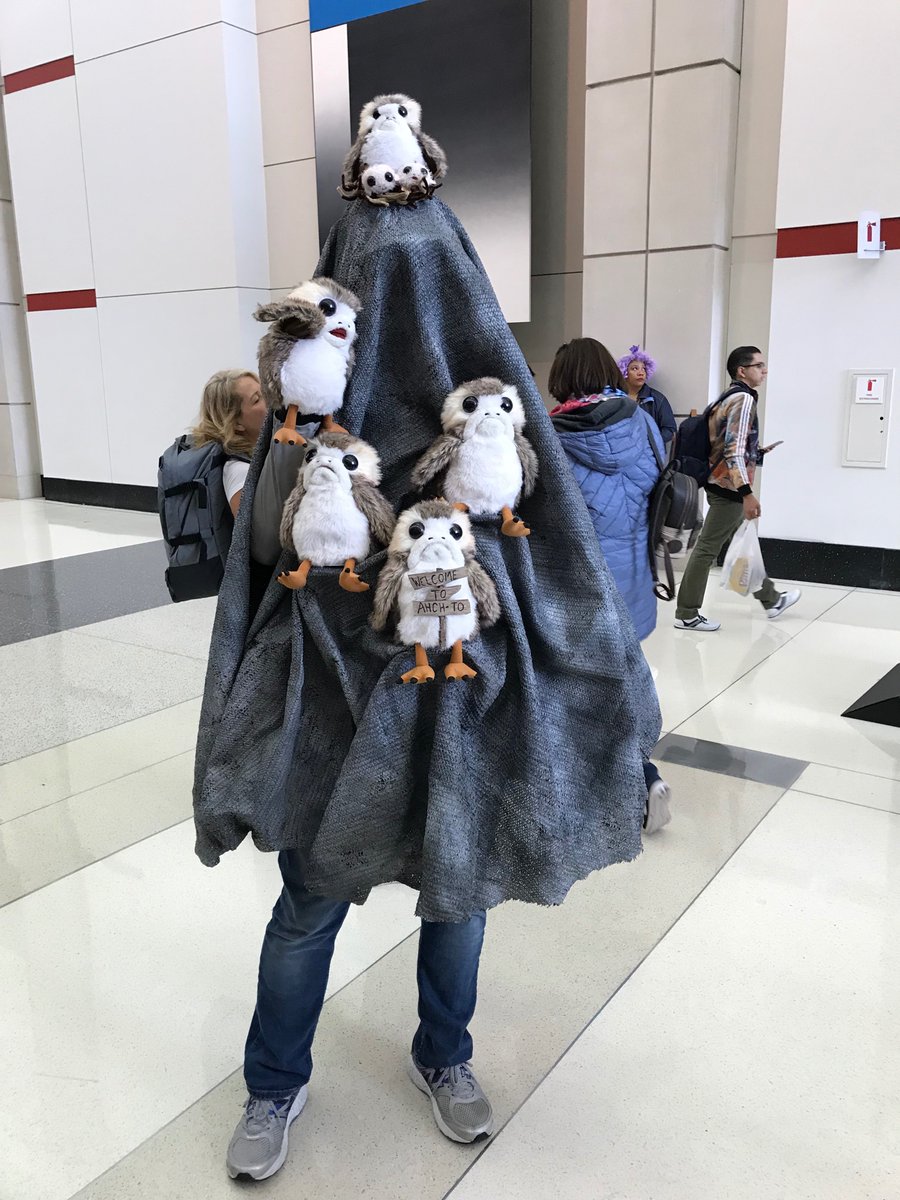 But apart from the high-minded and the paranoid, privacy per se is not a major issue in our politics. Most people want the convenience of the internet far more than they want the private spaces that older forms of communication protected. They shrug off the stalker-ish ways that corporations hurl their ads at you throughout your day. They put surveillance devices in their homes and pockets without a qualm. They accept hackings and online shamings the way a Californian shrugs off earthquakes. They assume that the extremists being surveilled and censored and sometimes arrested probably deserve it. And they welcome the possible advantages of panoptical living, hoping for less crime and less police misconduct, better public health, more exposure of corruption — plus, of course, the chance to see their favorite celebrities in the nude.

So for those who object inherently to our new nakedness, regard the earthquakes as too high a price for Amazon’s low prices, or fear what an Augustus or a Robespierre might someday do with all this architecture, the best hope for a partial restoration of privacy has to involve more than just an anxiety about privacy alone. It requires a more general turn against the virtual, in which fears of digital nakedness are just one motivator among many — the political piece of a cause that’s also psychological, intellectual, aesthetic and religious.

I’m having a very surreal and emotionally scattered weekend. For one thing, as I write — although this will be in the past as you read this, because of scheduling and choices I’ve made that make sense in the moment but likely won’t when this appears — I’m in Chicago, because I’m working Star Wars Celebration for THR. It’s a strange show, because, well, it’s literally a strange show for someone used to covering comic book conventions: It’s five days all based around one property, as opposed to four or so for an entire medium and multiple other related media. It’s exhaustive, sure, but also exhausting and arguably too much.

There’s a thing that normally happens to me at a long-running convention, you see. By “long-running,” I really mean, “more than two days.” It’s traditionally been at its worst with San Diego every year, in large part because that runs Wednesday through Sunday and is entirely immersive; it takes over my life for those days and the outside world ceases to exist. Now, factor in the fact that Star Wars Celebration is that length, but only about one subject. It’s as if the rest of the world has ceased to exist.

And yet, at the same time, at the back of my head, I’m hyper vigilant in a background radiation-type way of the fact that this weekend has also been the weekend where Eisner Award judges are meeting and deciding the nominees for this year’s awards.

It’s not just that I was a judge last year and feel nostalgia for the surreal process of the entire thing — although that too, yes — but also, I submitted THR’s Heat Vision for the Comics Journalism category this year and ever since I did so, awkwardly and apologetically because I can’t get over my anti-ego that easily, I’ve been unable to wait patiently to find out if we’ve made it to the nominee list or not.

I’m fully prepared to not make it — not only because, hey, maybe we weren’t that good, but also because I’ve been a judge and I know how wacky the process is; not making it to the list isn’t necessarily a sign of anything other than the process itself. That said, I am unreasonably excited by the prospect of being able to call myself an Eisner nominee, if it happens. More even that potentially winning, I think, I just want to be nominated. I want that far more than I expected, before I submitted.

So this weekend, I’m feeling disconnected from the real world, running around surrounded by Stormtroopers to a constant soundtrack of John Williams music, and dealing with ambition and a desire to be recognized for my efforts, all at once.

From here. Worth noting especially because I’m actually taking a day off today, in honor of the fact that I am feeling especially exhausted after Star Wars Celebration. I honestly can’t remember the last time I took a day off when it wasn’t (a) a national holiday or (b) I was sick.

Another selection of THR graphics, starting with a variation of one where neither editorial nor I knew what we wanted and the deadline was, like, ten minutes or something. (They went with the first one; the only direction I got was, “It can’t include an actual gun or anything connected with that,” because a mass shooting had (of course) just been in the news.)

Secrets behind the design/Me entertaining myself: The background reverse text in the above is the introduction from Junkie XL’s Wikipedia page.

Secrets behind the design/Me entertaining myself 2: The text in the above is literally just me typing “This is a graphic for THR” and cutting and pasting it.